Hello Everyone, In this Post i am going to Tell you About Top Typist of India Who Add his name in Indian Book of Records with the English Typing speed 127 WPM, Here is the full Biography of Mr. Rachapalli Pratap Kumar

Certificate of Indian Record of Record:- 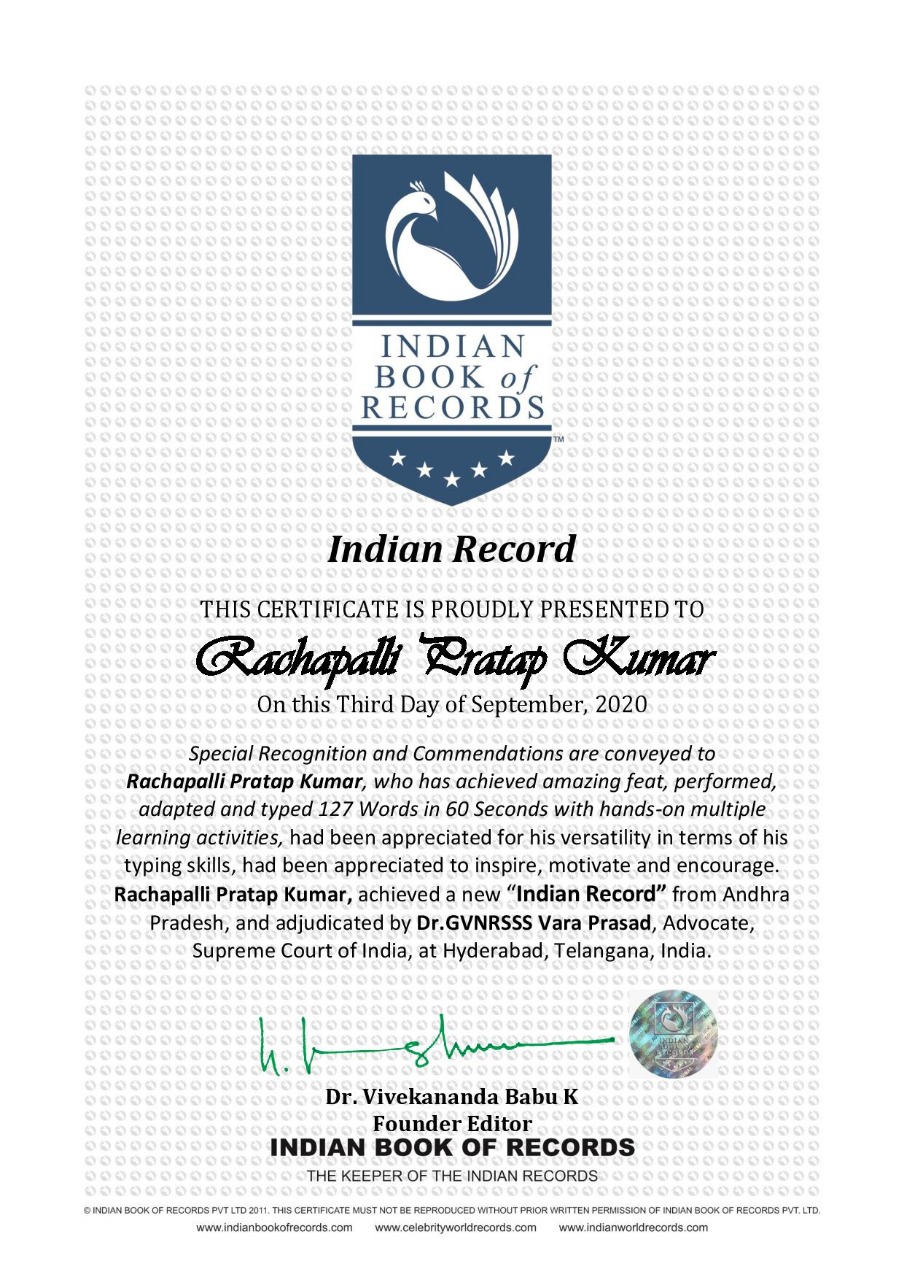 Family Background: I came from poor family. I have no family background.

Sports: Wushu (Kung-fu) Martial Arts-  My father is a Kung-fu Master and he is a General Secretary, Wushu Association, East Godavari District and a good father too.

I am also a Kung-Fu artist since my childhood and I have gave nearly 20 demonstrations throughout my district (East Godavari, Andhra Pradesh). I have also participated 04 National level competitions and also got a Bronze medal in 24th Senior National Wushu Championship, Chandigarh. Technical Skills : Typing Achievements : I have set a State Book of Record Speed English Typist @ 97 Words Per Minute on desktop computer in 2016 at the jurisdiction of Andhra Pradesh. I have also create an Indian Record as Speed English Typist @ 127 Words Per Minute on desktop computer on 03.09.2020. Inspirations : As I am in from poor family since my childhood, my mind was every time thinks about to get a Government job without give any bribe, and I am an ordinary student. When I am studying 10th class my eyes was turned up into Typing institute to type the typing machine keys interest, and joined in typing institute in my area after completion of 10th class with payment of fee @ 250/- P.M. I have also paid one month. In one month period I have gain only 10% of lessons in the Typing institute. The institute only permitted for One Hour per day class. On the other hand, I have no long time to learn the typing as I have to gain speedily as I have to get Government job after completion of 10th class or Intermediate. I think so, I have to practice more and more hours to gain speedily. In turn, I have a LCD screen DVD player at that time, it is also using for additional connection to play video games. I think so to reduce the learning cost, and accumulated some amount to purchase video game kit with keyboard type and finally purchased the same. Now, I have typing kit to practice typing at any time in day time and also night time. Nearly, I have practiced morning 2 to 3 hours and also evening 2 or 3 hours after my school timings. In a Holiday I have hole day is mine to practice typing. When I was bored in typing or receiving fingers pain, I have shifted my focus on video games. Surprisingly after completion of 10th class, I have also joined Intermediate (Vocational) in the year of 2011 which is includes the subjects of Typing, Shorthand and Commerce also for two years. When I am in Intermediate 2nd year I saw a news in my local channel that one person aged about nearly 40 to 50 set a Limca Book Record on the event of English alphabets (A to Z) Typing in 4 to 5 seconds period on laptop. I am also inspired to that news, and after that day I went to my college and practiced on desktop computer and checked my English alphabets typing speed and shocked about my speed as I have successfully typed nearly 2.30 seconds. From on that day I have interested to see Limca Book of Records, Guinness World Records, Indian Book of Records and other book of records web pages and searched about typing and other events. In turn, the difficult aspect is any book of record is expensive. When When I am studying Degree in 2013 I am contacted to Limca Book of Records, they are said that they are stopped records on typing. After some days I have also contacted Indian Book of records and dropped out due to financial resources. After completion of my Post graduation in 2016, I have telephoned State Book of Records, Andhra Pradesh and explained my typing speed and finally shared my typing video and approved the same by the team in 2016. This is the 1st achievement in record set. Surprisingly, after two months the Hon’ble District Legal Services Authority, East Godavari District, Andhra Pradesh released a notification for Typist-cum-Assistant on contract basis. I am happily applied the same post with my certificates including State Book of Record certificate in Typing. I am also selected that post. I have worked 1 and half year for the post. Finally, I have selected Typist on direct recruitment in the Judicial Department, East Godavari, Andhra Pradesh. It is not enough, I am waiting to set some more Indian Records.